Two young musicians, one a current student and the other a graduate of Bilkent University’s Music Preparatory High School, have recently won awards at competitions held in Europe.

Deniz Arda Başuğur, a 10th-year student at the school, attained second place in the Eighth International Young Trumpeters Competition held November 2-6 in Stara Zagora, Bulgaria. He outplayed 47 other aspiring musicians from 10 countries to claim the second place prize, which he received at a ceremony held on November 6.

Arda, who was born in Bursa, joined the Türkiye Polifonik Korolar Derneği Minikler Korosu at age 4. At the age of 12, he enrolled in the Bilkent Music Preparatory School, studying trumpet in Julian Lupu’s class. He joined Doğuş Çocuk Senfoni Orkestrası in 2013, and in 2014 became a member of the Bilkent Symphony Youth Orchestra.

Denizcan Eren, a 2012 graduate of the Bilkent Music Preparatory High School, came in first in the International Maxence Larrieu Flute Competition in Nice. The 21-year-old flutist’s prize included 8,000 euros and a silver flute worth 11,000 euros. 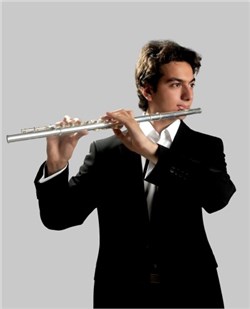 In the competition, Denizcan used a flute belonging to his teacher Sibel Pensel to perform pieces by Mozart and De Zeegant with the Nice Philharmonic Orchestra. His playing was judged superior to that of the other finalists, who came from the Paris, Lausanne and Seoul Conservatories.

Denizcan began studying music at the age of 6. He graduated from the Bilkent Music Preparatory High School as a member of Stiliana Stavreva’s class and went on to the Nice National Conservatory, where he studied with Sibel Pensel. After receiving his BA from Nice, he entered the master’s degree program at the Music Academy of Basel, where he is currently a student.