Last week, the Library Lunchtime Lecture series hosted Assoc. Prof. Refet Gürkaynak of the Department of Economics, who delivered a talk entitled “The Turkish Economy During AKP Rule.” The Main Campus Library Art Gallery had a capacity audience of students and academic and administrative staff for the event.

In his lecture, Dr. Gürkaynak examined Turkey’s economic performance during the period of governance by the AKP. He pointed out that this timespan was not, in respect to the economy, a single, monolithic period, and elaborated on the differences between the years from 2002 to 2006, and from 2007 to the present. In the earlier period, an IMF agreement mandated certain economic policies; in the more recent years, economic policy has been relatively unconstrained. 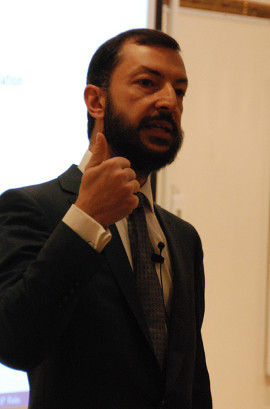 Dr. Gürkaynak also discussed the economic growth that occurred during AKP rule, stating, “A lot of the 2002-2006 growth and all of the 2010-2011 growth resulted from picking up existing but idle productive capacity. What we need is structural reform for faster capacity growth.”

Dr. Gürkaynak ended his talk by noting that the AKP had delivered great economic outcomes by following the IMF program early in their governance. For this, he said, they deserve praise; however, they have not replaced this program with any policy framework of their own. “We have been in a policy void for five years now,” he stated. “Although the international  climate has helped in the past few years, it will not do so forever. The 2002-2006 period seems to have been an exception rather than a new rule.”