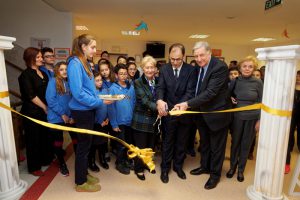 Last week, İDV Özel Bilkent Schools hosted a photo exhibition on the history of Turkey’s UNICEF committee. Titled “The Turkish National UNICEF Committee: From Its Founding by İhsan Doğramacı up to the Present (1958–2018),” the exhibition opened with a ceremony on February 26, during the week marking the ninth anniversary of Prof. Doğramacı’s passing.