Two Plays on Stage at Bilkent This Month

Two theatrical productions that had their Bilkent premieres last semester are back on stage this month. Presented by students from the Department of Performing Arts, “Küçük Tekneler İçin Fırtına Uyarısı” and “Aktörün Kabusu” both have performances scheduled in February. 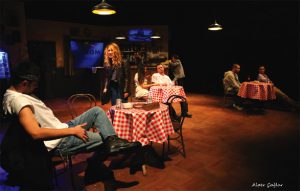 “Küçük Tekneler İçin Fırtına Uyarısı,” a Turkish translation of American playwright Tennessee Williams’s “Small Craft Warnings,” is being staged by Performing Arts students as a senior project. Remaining performances will take place in the Bilkent Theater Hall on February 17 and 24.

The play depicts lonely and desperate individuals excluded from so-called society, and their struggles to interact with others. The characters serve as embodied versions of the deep fears people keep hidden inside, and the fragilities that they hide from themselves as well as from others. 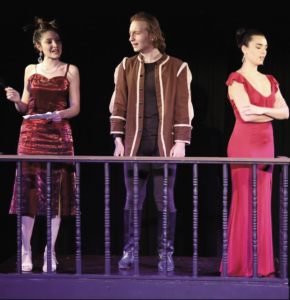 “Aktörün Kabusu” is a Turkish translation of Christopher Durang’s play “The Actor’s Nightmare.” Department of Performing Arts students will present the remaining performances of the play in the Bilkent Chamber Theater Hall on February 12, 19 and 26.

This short comic work involves an accountant who is mistaken for an actor’s understudy and forced to perform in a play for which he does not know any of the lines. The play was inspired by the dreams actors and performers often have in which they are about to go onstage and cannot remember their lines.“Aktörün Kabusu” is directed by Edip Tümerkan and performed in Turkish; the translation is by Zeynep Özden. Lighting design is by Yılmaz Ertekin, and cast members are Esra Sürgü, Ece Babayiğit, Emre Arslanbek, Göktuğ Kemal Metin and Sena Burcu Kurdoğlu.

All performances of both plays will begin at 8 p.m. Students taking GE250–251 will receive 20 course points for attending either production.

Tickets are available at https://ticket.bilkent.edu.tr. For more information, please call the ticket office at ext. 1775.