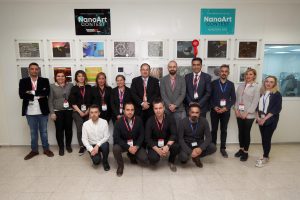 On March 21, the National Nanotechnology Research Center (UNAM) held its sixth annual NanoDay Symposium on Materials Science and Nanotechnology. This year’s symposium introduced the latest developments in nanoscience and nanotechnology, focusing on the theme of the field’s long-term impact on human society. The 250 registered attendees included academicians and researchers from 10 universities as well as representatives of a number of companies and government institutions. The symposium opened with welcoming remarks from Prof. Abdullah Atalar, rector of Bilkent University, and Prof. Hilmi Volkan Demir, director of UNAM. Prof. Demir highlighted the center’s achievements during the past year and emphasized the importance of open lab operation and the mission of excellence in science and technology at UNAM.

Keynote talks were presented by three distinguished speakers: Prof. Monica Olvera de la Cruz, a theoretical biophysicist from Northwestern University; Prof. Thomas Hermans, a chemist from the University of Strasbourg; and Prof. Chris Toumey, a cultural anthropologist based at the University of South Carolina who investigates the societal and cultural effects of nanoscience and nanotechnology.

NanoDay ’19 also included poster presentations and short talks by UNAM graduate students and researchers. This is always a key component of NanoDay, in that UNAM, as part of its research culture, encourages its graduate students and early career scientists to present their research to an audience in forums such as this. 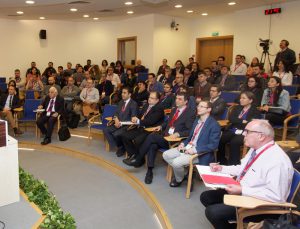 The event concluded with a brief award ceremony at which awards were given for the best posters and also for the best entries in the annual NanoArt Contest; this was followed by a lab tour open to all attendees.