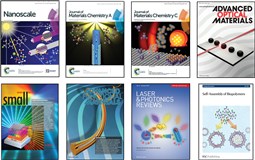 Reflecting the dynamic research environment fostered in Turkey’s first national research center, eight articles by research groups at UNAM have been selected as cover pages for eminent journals in nanoscience, materials chemistry and optoelectronics. Ranging from composite photocatalysts that blast away at organic dyes to surface-etched channels that allow lab-on-a-chip applications on the edges of microwires, cutting-edge research at UNAM has been highlighted on the covers of the journals Nanoscale, Advanced Functional Materials, Advanced Optical Materials, Nanophotonics, Small, Laser & Photonics Reviews and the Journals of Materials Chemistry A and C.

Six of the highlighted publications detailed the fabrication of novel nanomaterial architectures: Dr. Mehmet Bayındır’s group reported a method to produce polymer-embedded, chalcogenide-based optical cavities with potential applications in mid-IR sensors and optical logic gates, as well as a nanowire-based take on the ever-popular lab-on-a-chip microfluidics applications; while a long-running collaboration between the groups of Dr. Necmi Bıyıklı and Dr. Ali Kemal Okyay resulted in the design of a method for the low-temperature fabrication of III-nitride thin films, allowing their production on materials with low melting temperatures. In addition, Dr. Okyay’s group designed and synthesized a novel structure to enhance efficiency in dye-sensitized solar cells, based on a composite nanowire of the photoactive materials ZnO and TiO2.

Dr. Tamer Uyar’s and Dr. Necmi Bıyıklı’s research groups took the same two metal oxides in a different direction, coating a nanowire core with a thin shell layer to create an effective photocatalyst that produces electron/hole pairs under light, uses the electrons for photocatalysis and “dumps” the excess holes to the material core. Dr. Hilmi Volkan Demir’s team, in their turn, published a manuscript on a system that substitutes the commonly used polymers PEDOT and PSS for a layer of wolfram oxide to enhance QLED performance, and contributed to two reviews on the optical properties and energy transfer dynamics of quantum dots.

In addition to these highlights, the research output of UNAM to date has included more than 450 journal articles and has received 52 awards and 24 patents since the time of the center’s founding in 2008.