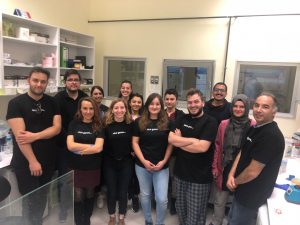 Over the course of 2019, work done in the Synthetic Biosystems Laboratory (SBL) at UNAM has been highlighted on the covers of three journals. The cover articles report research in which Asst. Prof. Urartu Özgür Şafak Şeker, the head of the laboratory, and his group used synthetic biology tools to program cells for innovative functionalities. Specifically, the research consisted in programming bacteria to carry out logic operations and computations to deliver therapeutically important proteins in disease conditions or controlling assembly of nanobiomaterials.

The most recent of these articles was published in the September 26 issue of Advanced Materials, a leading journal in its field. It reported SBL’s success in controlling the genetic conditions within bacteria to create patterns using protein polymers called biofilm proteins. In the study, Dr. Şeker and his group created AND and OR logic gates using advanced genetic engineering tools. Using this system, the researchers were able to control the secretion of different proteins with distinct biochemical properties to control the assembly of polymeric proteins. The study was a part of the laboratory’s work on making cells that, it is hoped, can be used for hard and soft tissue regeneration in near future.

In a previous study that was featured on the cover of the April issue of ACS Synthetic Biology, also a leading journal in its field, Dr. Şeker’s laboratory succeeded in designing cells able to secrete a variety of proteins in a sequential manner at any time using logic operations and state machine design. Then, in a subsequent study, Dr. Şeker and his team showed how cells could be programmed using synthetic genetic switches to control secretion of biofilm proteins along with enzymes to increase the lifetime and durability of the enzymes. This work was highlighted on the cover of the July 2019 issue of ChemBioChem.