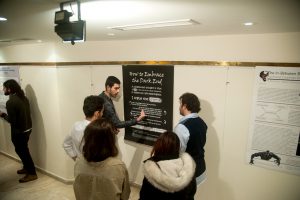 On Saturday, April 20, the third Bilkent Undergraduate Philosophy Conference took place in the Bilkent Library Art Gallery. The conference featured presentations and posters by students from a number of philosophy departments in Turkey and also overseas. Each participant had the chance to present their work and engage in philosophical discussions with fellow undergraduate students, as well as graduate students and faculty members from Bilkent’s Department of Philosophy.

The topics covered by the speakers were diverse. They included such questions as whether Protagoras’s arguments show that democracy is the only legitimate form of government; how Euthyphro’s dilemma should be understood; whether machines will be able to think consciously; whether the kalam cosmological argument for the existence of God is sound; how a Bayesian approach to epistemology might be criticized; and how the ontological issues regarding personal identity can shed light on the suitability of different solutions to communicable diseases. 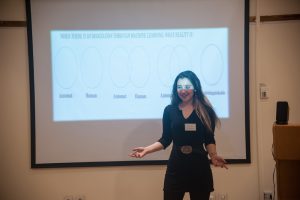 A poster session followed the talks, during which students presented their academic posters and discussed their ideas and arguments with fellow attendees. The gallery was a particularly appropriate setting for the session, as the posters were hung like works of art, which, arguably, they were. For almost two hours, lively, substantive philosophical discussions took place in front of each poster.

This international conference was organized by the Department of Philosophy, the Literature Society’s Philosophy Committee and the Legal Philosophy and Sociology Club. Although it is the main undergraduate philosophy event of the academic year, other activities, including workshops, reading groups and movie screenings, also take place throughout the year. Information about upcoming events can be found on the Bilkent Department of Philosophy website (http://www.phil.bilkent.edu.tr).