Use of Color in Antiquity Explored at Bilkent Archaeology Day 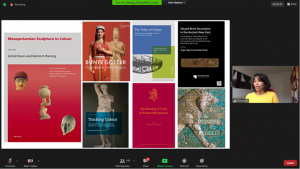 After a one-year hiatus due to the pandemic, the tradition of holding an annual Bilkent Archaeology Day resumed this year. The event, organized by the Department of Archaeology, took place on Sunday, April 11, via Zoom. The program was titled “What a Colorful World: Some Pigments and Colors in Antiquity.”

In the past, this subject received little attention. Although Greek and Roman sculptures, for example, were originally vividly colored, in the 19th century scholars were debating the very existence of this polychromy, while in the 20th century the topic elicited little or no interest. This situation began to change only in the 1990s – a trend that accelerated in the 21st century with the help of new technologies, to the point where it has finally become a field of research in its own right. The Bilkent event provided an overview of the research now going on.

As in previous years, Archaeology Day’s morning program was organized by the Bilkent Archaeology Club, on the theme “Polychromy: Its Context, Use and Meaning.” The speakers, who included students from Ankara Hacı Bayram Veli University and Ankara University as well as Bilkent, presented papers on topics that took the audience from ancient Greece and Anatolia to Mongolia and China.

The afternoon program was organized by the Department of Archaeology, with scholars not only from Bilkent but also Tübingen University, the Louvre Museum and Oxford University participating. They presented their current research, discussing the sources and trade of dyes and pigments, as well as their uses and meanings, in various cultural contexts ranging from prehistory in Africa through antiquity in Mesopotamia and Anatolia to today’s Silicon Valley.

The event attracted more than one hundred attendees from across Turkey and abroad, whose many questions to the presenters indicated their interest. Bilkent Archaeology Day continues to be a vehicle for strengthening relations within the archaeology community, both in Turkey and internationally. The organizers expressed their hope that this year’s discussion of polychromy in antiquity and beyond would be a source of inspiration for archaeology students, given the fact that, as the presentations showed, the subject offers a large field of investigation with a wide choice of topics for study.