Not so long ago, on December 9, Vakıfbank S.K. won the gold medal in the 2018 FIVB Volleyball Women’s Club World Championship tournament, held in Shaoxing, China. The world champions beat Brazil’s Minas Tenis Clube in the final match to retain the championship title they won last year – a title they had also won in 2013. So, this is the Vakıfbank women’s third world championship so far.

The team has in addition won four Champions League championships since 2011. On May 6 they gained their second consecutive CEV Volleyball Champions League title, and fourth overall, in the Romanian capital, Bucharest. The international success the team has had is worth talking about, considering that it’s not only huge but has also proved sustainable.

Are We Successful?
Other teams from our country have also had success at the international level in various sports from time to time. In 2017, the Galatasaray and Fenerbahçe basketball teams won the EuroCup and EuroLeague championships, respectively. The performance of Turkey’s national basketball team in the 2010 FIBA World Basketball Championship final gave us a night to remember, as did that of the national football team in the Euro 2008 semifinals. We also cherish the memory of Galatasaray winning the UEFA Super Cup in 2000.

Turning to the Olympics, we see that following Ruhi Sarıalp’s bronze medal at the 1948 Summer Olympics, Turkey had no medals in track and field for 56 years, until Eşref Apak’s bronze medal in the hammer throw in 2004. Although we have seen some significant successes by athletes such as Süreyya Ayhan and Nevin Yanıt at other international meets, the shortfall at the Olympics is still huge, symbolizing a puzzling shortfall in sports overall in Turkey as well.

In 2018, our 8 athletes came home from the Winter Olympics with no medals; at the 2016 Summer Olympics in Rio, 103 athletes from Turkey won 8 medals, 5 of them in wrestling – which is considered Turkey’s national sport.

Experts say that Rio was Turkey’s fourth most successful Olympics ever; however, when taking the country’s population and GDP per capita into account, Turkey should have won 25 medals to be considered “successful.”

Where Do We Go Wrong?
We would expect a country that is able to focus on sports to be economically stable. Worldwide, the sports sector works with millions and even billions of dollars; for many things, from technical facilities to proper institutions, you need a stable money flow. Still, it’s good news that we’re seeing more technical assistance and aid from the private sector; banks are certainly one source of such assistance. However, as noted above, Turkey is still way below its potential in sports when GDP per capita is considered.

In 1938, at the direction of Atatürk, a law was enacted making physical education (PE) and sports obligatory in schools. A General Directorate of Physical Education was founded, PE classes were included in school curriculums, and many grand plans for endeavors such as creating sports complexes and training teachers were made. These plans were a priority regardless of the country’s socioeconomic condition. Today, the application of the law has failed, in that students generally regard PE classes as spare hours to waste, and a lack of proper training is still the biggest obstacle to the further development of sports in Turkey. Indeed, many teams, who confess that they would like to employ Turkish coaches, say there are so few well-educated and capable coaches from this country that it is necessary to bring someone in from outside. Vakıfbank S.K.’s employment of Giovanni Guidetti, who hails from Italy, is an example of this. 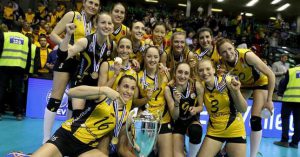 The problem is economic, but it is also mental. We don’t take sports seriously, and we don’t allow students time to play sports. We admire the scenes in foreign movies where students apply to colleges and are admitted based on their various achievements in sports, but at the same time we continue to see an athlete as someone who has no chance of continuing their education properly. It’s true that a student preparing for the Olympics needs to train for a thousand hours a year on average, and that for a student in Turkey’s education system, who is likely to be attending both school and after-school courses, this is impossible. Another dimension of this mentality is that we don’t see being an athlete as a job; we see it as a hobby, not something one can do to earn a living.

The necessity for people to place greater value on sports and physical education also applies when it comes to governmental perspectives about the place of sports in national and economic development. For example, the Chinese government plans to build an $813 billion sports industry by 2025. As part of this project, they are establishing soccer schools and academies around the country. Turkey should likewise include ambitious plans for sports in its “2023” aims, as well as in its preparations for the Olympics; otherwise it is utopian to talk about success in the Olympics or any other athletic endeavor.

Here I come back to how Vakıfbank’s success has proven sustainable. Basically, they put great emphasis on their infrastructure, meaning that they don’t just focus on a one-in-a-million legendary player, but continue to educate and nurture future legends as well. The new sports facilities they have constructed allow players from the educational infrastructure to interact with the “real” players. Plans have been made to compete for many championships in the years to come, and the investments for those plans are on point.

Women in Sports
Believe it or not, women have proven that they are one of the keys to success in sports. More than 50 percent of the medals received by the top three medal-winning countries in the London Olympics came from female athletes. American sportswomen, for example, contributed 29 out of the country’s collection of 46 gold medals.

Women in many Muslim countries, on the other hand, face discrimination and prejudice, manifested in controversy over their sports attire and the way they use their bodies in sports. Many talented athletes are discouraged from even participating in sports. In this situation, the Vakıfbank women’s volleyball team is a powerful role model for women in Turkey, in the region, and in the world. For that reason, it’s worth celebrating them once again.