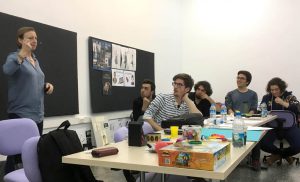 Bilkent students recently had the opportunity to learn about design from an unusual perspective when Dutch game designer Ellis Bartholomeus visited campus to give a talk for the Department of Communication and Design. Over a decade ago, Ms. Bartholomeus began focusing on designing games for older people; in her talk on February 8, she shared the insights she has gained from her work in this area, as well as her experience in game design in general.

Providing some background on her career, she noted that she has been involved in game design since 2000, creating and developing games for 10 years with her company Laika.nl before switching to a more advisory role as a market researcher and consultant for other companies in the field.

Her greatest contributions have been in the form of designing games for a target audience that is usually the last group to be associated with gaming. “They are an ideal group, really. They have time, money and are loyal and curious about technology,” she stated as she explained her decision to target the elderly and create games that enable them to have fun, become more interactive and learn new skills.

Ms. Bartholomeus also discussed the stigma and stereotype that is still attached to the idea of older people playing games, as many still consider the industry’s products to be for younger people. She declared that she views the consequent lag in game development for this age group as an opportunity that should be seized. After all, she said, noting the potential to make a positive contribution to society, “Games help connect people.”

Addressing Bilkent COMD students interested in game design, she emphasized the importance of watching one’s games being played and learning from clients. “We have to respect our players, and the focus should not only be on the game being good, but also on it being inviting to the players,” Ms. Bartholomeus declared, noting in addition her belief that designers should develop games with a purpose.

The final topic Ms. Bartholomeus discussed was the need for game designers and developers to take into account the rapidly advancing technological changes in virtual and augmented reality. She noted that research on artificial intelligence has the potential to determine what feedback to give players and how to adapt the level of challenge to their skills. The gaming world is, she said, “becoming increasingly better and more interesting.”