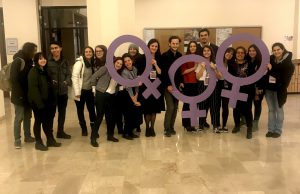 On February 23 and 24, the Bilkent Women’s Studies Society held its third annual Women’s Summit, bringing together students from a number of universities, experts in various fields and people from every walk of life. The summit, which took place in Mithat Çoruh Auditorium, consisted of ten sessions, each followed by a question-and-answer period; speakers were academicians, writers and politicians from diverse backgrounds.